A little bit ago a full trailer for the Ready Player One movie was released and let me tell you, the resulting discussion from everyone made a whole bunch of old feelings resurface. Namely just how much the book sucked and how awful a thing it is despite its popularity. If you don’t know what Ready Player One is or haven’t heard of it, here’s a quick summary: it’s the future and the actual world sucks, but there’s a virtual world called Oasis where everyone can go and be different people. The creator of Oasis hid an Easter Egg in the virtual world somewhere and whoever finds it inherits control of all of Oasis, so there are people who dedicate their lives to finding this Easter Egg so they can become the world’s most powerful person.

This concept is actually very interesting. However, the creator of the Oasis was obsessed with the 1980s – which means all the hunters for the Easter Egg basically have to become historical experts on everything 1980s pop culture. And therein lies the problem with Ready Player One: the book becomes reference after reference after reference due to the nature of everything having to do with the 80s. Want an example? Here’s a nice excerpt for your enjoyment: 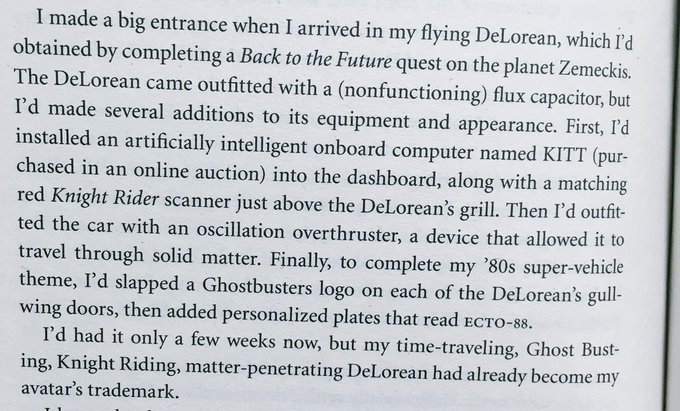 Now I’ll be the first to admit the entire book isn’t as bad as that one paragraph. But if any short excerpt could sum up the book in all of its reference-making glory, that’s the one. It’s basically Member Berries the Book.

Or this gif in book form.

I don’t mind references – but the problem is when the references become all encompassing that they dilute the material to the point that it can’t stand on its own. For example, let’s compare two recent media that took place in the 80s: Stranger Things and It. Stranger Things piles on references: both seasons revolve somewhat around D&D with their naming devices. The kids dress up as the Ghostbusters, they play Dragon’s Lair and Dig Dug in the Arcade, etc. Comparatively, there are very few obvious references to the 80s in It. Stranger Things was a loving homage to the 80s, while It was just a movie that took place in the 80s. That isn’t to say that Stranger Things is worse or better because it makes obvious references. But there is this weird adrenaline surge that everyone (including myself) gets when you “get” something – and sometimes creators go overboard trying to create this surge of “oh, I get that!” to the detriment of their actual creation.

Take the movie Paul – it’s a road trip comedy where Simon Pegg and Nick Frost find an alien named Paul and have to escort him to safety so he can escape the planet. The majority of the movie is great, but towards the end of the movie they pile on a bunch of references at an almost frenetic pace – as if they were trying to make up for the first two thirds of the movie not having many. Jason Bateman shoots a radio and says “boring conversation anyway.” One of the character’s father races down the highway, holds up a bible and says “I’m on a mission from God!” Someone punches Sigourney Weaver in the face and says “Get away from her you bitch!” And then Jason Bateman’s character is revealed to be named Lorenzo Zoil.

Don’t get that last one? Don’t worry, 99% of people don’t. It’s a reference to a 1992 film that was put in by Nick Frost because he was just like “yeah, I like doing that sort of thing.”

So why is making references a bad thing? Well, I have two reasons. The first is that knowledge of references is often used as a gateway to “nerd culture.” Often times you aren’t a “true fan” if you can’t name 20 superheroes, or you’re only wearing the T-shirt and haven’t ever actually played Bioshock, or if you can’t quote the entire Out of Gas episode from Firefly. Nerdy knowledge is somehow accepted as a currency that’s almost worth more than bitcoin. People pride themselves on knowing the number of the trash compactor in Star Wars, or every version of the Enterprise that exists in the Star Trek universe, or how many iterations of Captain America there have been – and if people become “fans” of the material and haven’t done the work (so to speak) they’re looked down upon. Heck, just this weekend I was called “not a true Star Wars fan” because I thought The Last Jedi was a good movie and also liked Thor: Ragnarok – because apparently both of those things qualify me as not a fan.

This kind of knowledge brokering is also often used for casual sexism as male fans often look down upon female fans if they can’t live up to the correct amount of knowledge. Here’s one of my favorite examples:

This thinking leads to a toxic environment. After all, how are you supposed to welcome new fans into the fold if they have to had an encyclopedic knowledge of the topic from the jump? And more importantly, who cares if they just like the design of the shirt and wanted to wear it? People are allowed to like things and not spend every waking minute of their life worshipping it. Differentiating yourself from other fans as a “true fan” is just an elitist, snobby, awful way to be.

The second reason is that bad writers and creators often mistake references for good content. Returning to the excerpt from Ready Player One, that is just a hodge-podge of every 80s car reference thrown into one. It’s like a five-year old wanting a peanut butter-chocolate-ice-cream-Skittles-bacon-chicken-pizza. Just because you like all that stuff doesn’t mean you should just mash it all together and throw it out there. But even beyond that – there is no plot relevance to any of that description. Instead of evoking new imagery and creating an interesting world, the author just piles on reference content and expects it to do the heavy lifting for him.

Not even video games are immune to such problems – especially in localizations of Japanese games. Sometimes translators, instead of trying to convey the correct translation of what was originally said, will take a shortcut and make some sort of pop culture or meme reference for a quick joke at the expense of actual content. 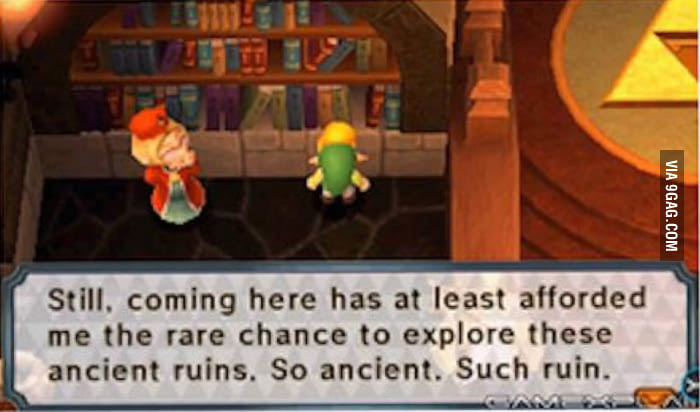 I’m sure this reference will age well.

I don’t mind references or call-backs if they’re done right. But when creators use them to evoke nostalgia in place of other emotions just to get you to like their thing I feel it’s a cheap and underhanded tactic. And then actual fans use these references as a way to signal how much better they are than other people because they got that reference! It’s this weird, awful cycle that proves nothing and only alienates people further from the things you want them to enjoy with you. More original content please and less preying on our nostalgia for old things. I love sequels and reboots and remakes as much as the next guy, but some of my favorite movies and games this year were completely original stories. So more of that and less of…whatever Ready Player One is, please.